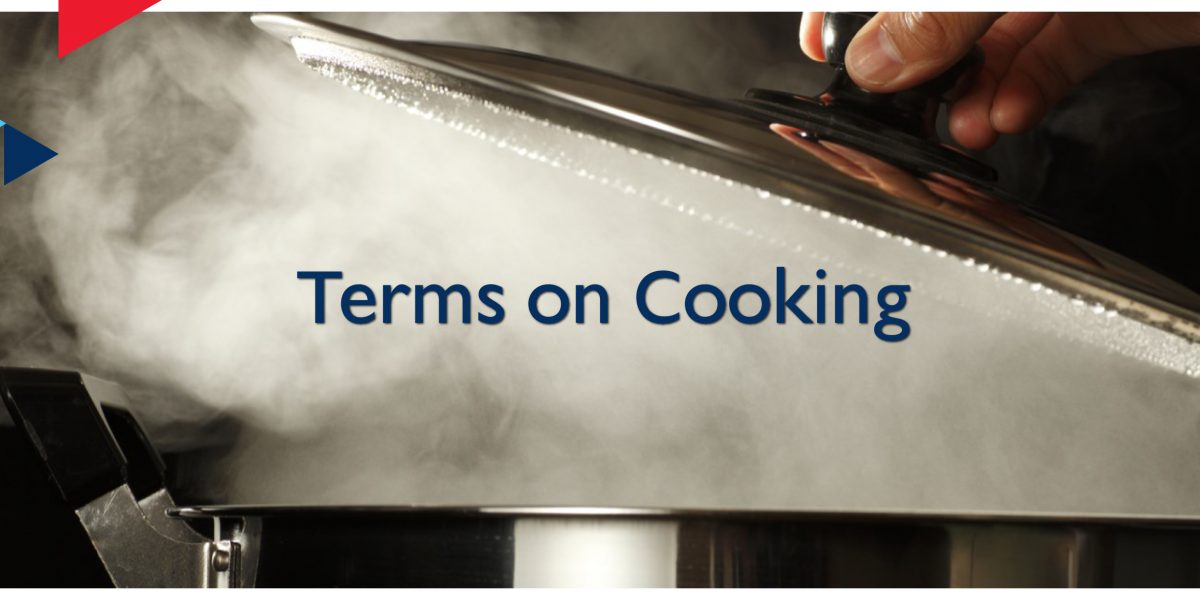 Terms on Cooking – Cooking today is popular as both a career and a serious hobby. English-language cooking books and online features are a common source of new recipes. Some terms used in cooking have multiple or tricky meanings that can cause confusion and difficulty when trying to follow a recipe. In order to prepare you for increasing your culinary skills, five such terms are explained below.

Poach – Poaching is a way of cooking or partially cooking by fully submerging a food object in medium-temperature water, syrup, wine, broth, milk, or other liquid. Two popular dishes that use this technique are poached eggs and poached pears. Other items commonly poached include fish and fruit.

In the modern era, there are utensils to assist with poaching eggs for greater ease during the breakfast hours. An egg coddler is a simple but traditional container that holds eggs with some condiments and seasonings before being steamed to deliver coddled eggs.

Blanch – Blanching is the method of briefly exposing an ingredient to boiling water. Common objects are vegetables, pastas, and noodles. Blanching usually achieves vibrant colors and/or tender conditions. This technique is quite similar to parboiling. The major difference is that the object of the former is usually bathed with ice or cold water after the boiling step, while the latter is not. Moreover, parboiling can also be used with beans or fruit to make their peels easier to remove, as well as in the cooking of sticky and Thai rice, which requires soaking and steaming.

Broil – Americans use the term ‘broiling’ for cooking food with a heat source top-down, and ‘grilling’ for the bottom-up method, but British people use ‘grilling’ for both. Regardless, unlike both of these ways of cooking with flames or hot metal components, ‘baking’ requires the generation of high temperatures inside an oven.

The term ‘barbecue/barbeque’ is usually used to refer to the cooking of foods with hot flames coming from the bottom of an outdoor standing grill.

A ‘salamander’ is a type of oven for top-down burning or warming, although this method of cooking has no associations with reptiles.

Stir – To ‘stir’ is to toss or gently move all ingredients constantly within a heated pan or pot in order to ensure even cooking. This is associated with ‘sauté’, a French loanword that is similar to ‘pan-fry.’ All of these cooking methods require a small amount of oil, fat, or butter. This is different from ‘stir-fry’, which uses much higher temperatures. If the stir-frying is done quickly with intense flames and in a Chinese wok, it can be called ‘wok-fry.’

Meanwhile, ‘deep-fry’ is cooking food by immersing it in very hot oil, as with the cooking of fried chicken and French fries. This method results in crispness for the items deep fried.

Braise – ‘Braising’ is the cooking of meat or other items with a small amount of water, soup, fat, or other liquid that does not entirely cover the object to be cooked. With ‘stewing,’ the food is fully submerged in the liquid. One requirement of braising is that the pot must be covered by a lid in order to generate the appropriate amount of steam. Generally, a whole piece of meat is cooked during braising, but it is diced into small pieces for stewing.

In comparison, simmering requires the longest time, with the heat below boiling point.